Action shots are cool, so is base jumping. Our model here (ha, model) ‘base jumped’ from a public bench armrest barely 2 feet above the ground and managed to get to 6 feet in the air to get us this shot. The reflection on the left hand side shows what has been cut out of the right hand side, creating a ‘pseudo panorama’. Kudos to the model for taking his coat off in winter, the white T-shirt (a size smaller than it should be) helps make him stand out and balances the color distribution at the same time. 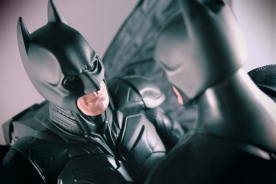 Action figures lend themselves very well to photography in general as they tend to do what you want them to do, you dont gotta feed em or be nice to them and can undress them whenever you like, unlike human models(pah). Unfortunately, I do not have a macro lens and was oblivious to the fact that the camera has a macro mode until a couple days ago so my close up shots werent as good as I wanted them to be. The green filmic tone was added using a ‘toy camera’ filter in post, it works surprisingly well, considering that this is supposed to make it look toyish and fake.

I took two shots of the batmen but preferred the above as the Dark Knight suit displays a lot more detail than the begins suit and the mini studio lights that I used, accentuated the countours of the cowl. Sexy. Although I should really try and do something with the Begins suit in full view at some point. 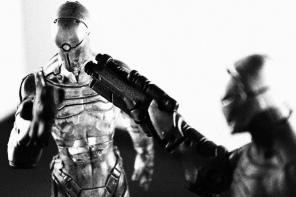 I hereby present my half-arsed attempt at making Ninja Grey Fox (MGS Fame) look all noir-ey. The transparent (stealth camo) version of the figure is the one in focus, trust me, this didn’t look even half decent before it was black n whited…yea, thats a word now.
In case you didn’t already know, ninjas are awesome in all forms. They can creep up on you, cut your heart out while you’re reading this post at your computer and leave so quietly that you only realise you’re dead after reading this sentence as your blood would have completely filled your stomaaa….argh.